How and why to have tough conversations

What is a “tough conversation”?

Why tough conversations are tough, but important

Conflict is inevitable and productive

The consequences of avoidance

What all tough conversations have in common

What to do (and what to avoid)

We have all had this sinking feeling when we realize that there is something that we need to talk to someone about. Maybe you are leaving work, going into a meeting, or you wake up with it, but whatever the location, the feeling is almost always accompanied by the dreaded “should” statement that we often use against ourselves.

“I should really talk to him about that.”

Other times, a tough conversation happens to us. We are minding our own business, innocent, knocking off things on our list, when all of the sudden, someone upsets our apple cart.

“Why is she bringing this up now?”

Why are those tough conversations necessary, and how can we get better at them?

What is a “tough conversation”?

In short, a tough conversation stems from an unsolved – and sometimes unspoken – conflict. It may be conflict that hasn’t actually taken place, although you may have seen sparks, or it is a regular conflict that one or both of you wants to settle.

The conflict could come from opposing ideas, beliefs, needs or desires. Tough conversations aren’t limited to certain categories, and certainly not limited by the context of your relationship with the other person – meaning sometimes a tough conversation at work is about things that aren’t exactly about work. 1Political or religious debate, anyone?

The things we complain about to other people outside of work indicate that a tough conversation is necessary or might happen at work. Think about statements that start with:

The desire to have a tough conversation – no matter how much anxiety it produces – is almost always reflective of the desire to make a situation better, to reach a resolution, to solve a problem, or to at least make something less bad. 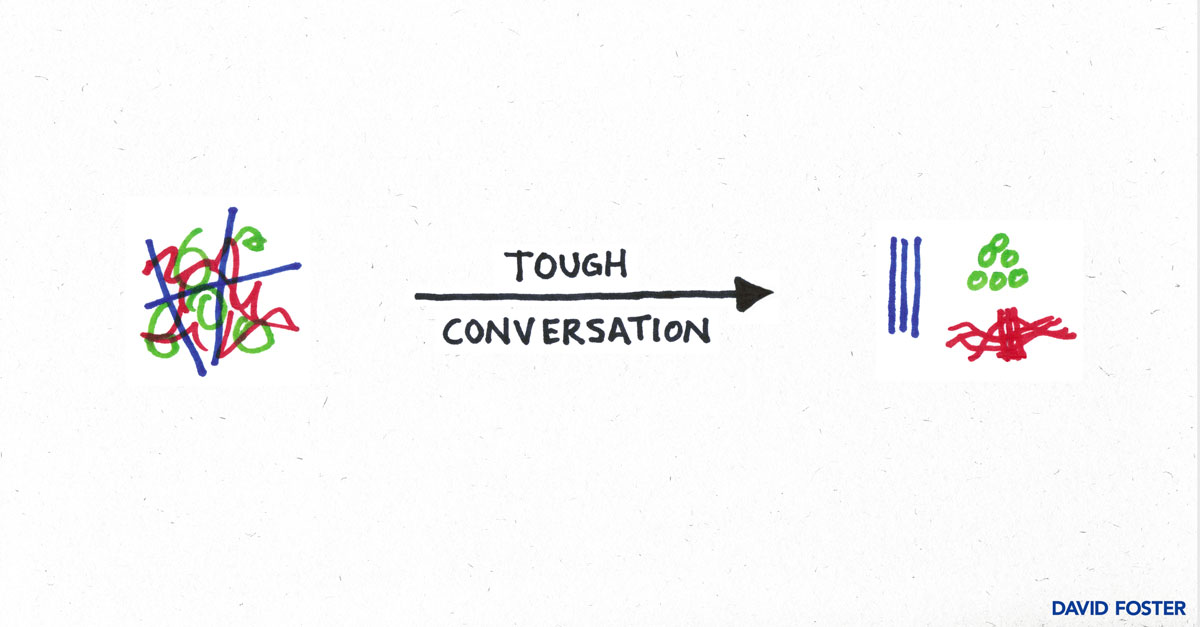 Why tough conversations are tough, but important

Here are some of the things that make a tough conversation, well, tough:

Carl Jung – for all his faults – linked the ideas of terror and enlightenment: when someone faces fears (terror) voluntarily, he or she adapts and learns (enlightenment). 2 This is the foundation of the wildly successful practice of Exposure Theory that helps people with phobias and trauma. This idea is reflected in the many myths, but King Arthur and the Knights of the Roundtable is one of the more popular and well-known. In short, we tend to hide or avoid things that are uncomfortable, but progress (enlightenment) is contained in voluntarily facing the uncomfortable fear (terror). That’s where we get expressions like “there is no progress without challenge” and “everything good is on the other side of hard.”

That’s what Jung and King Arthur have to do with tough conversations: they are challenging, hard, uncomfortable, and sometimes terrifying, but willfully having tough conversations brings further understanding, deeper connection, a better social environment, (and possibly enlightenment).

In fact, how well both of you succeed in your tough conversations determines the depth and quality of your relationship. Do you always “just fight about politics” every time it comes up and then fake maturity by “agreeing to disagree”? Or do you embrace your differences, respectively, and truly learn from each other’s position?

Conflict is inevitable and productive

It is a fallacy that team or individual relationships are devoid of conflict. Good teams, personal, and work relationships all require some sort of friction between people in order to discuss, learn and progress. Different points of view, desires and conclusions help you examine yours, and the difference between someone else’s perspective and yours serves as a necessary contrast that enables you to find places you can improve or change. (Those who know already that either they are perfect or the other person is clearly and completely wrong are free to skip to the next section.)

Every one of us is imperfect, and we grow over time. What we think or agree with changes as we learn more and become more experienced in life. Additionally, we have strong similarities between us, but we don’t always have the same preferences or the same cultural background. So there will be differences between how we think, what we want, what is valuable to us and how to proceed in life.

That means conflict between us is inevitable, and when we work together, tough conversations are necessary to resolve that conflict.

In order for tough conversations to be productive, we need to face the conversation voluntarily. Even when you aren’t the person who has initiated the conversation, you still have the option to either participate or defend. Participating is not agreeing – participation is listening, restating, and being open to understanding what the other person is saying. Defending is saying and doing things that indicate simply that the other person is wrong (sometimes indirectly and cleverly) and won’t allow a bridge to be formed between you.

Indeed, how you have tough conversations and defuse conflict is a critical part of how well your relationship functions. A cooperative – even if it’s uncomfortable – tough conversation has the ability to strengthen both your connection with the other person, but also allows a better version of the disputed subject to emerge.

The consequences of avoidance

If you avoid a tough conversation, the problem or conflict gets bigger. What you don’t attend to grows, festers, and begins to affect more aspects of your work and – very quickly – your physical and mental health.

Something else takes place when you avoid tough conversations: we adapt our behavior to compensate for the problem.3This is also true physically. Compensatory patterns due to weakness, lack of mobility, or injury often cause more pain and damage than the original condition. We steer clear of certain people, certain topics, or parts of work. We may “just” take care of things that “somebody else” should be doing, we even change strategy or give others different work in order to stay away from the conversation we dread.

Most tough conversations – even the challenging ones – are often not as bad as the movie script in our head, and we create the emotional exaggeration that makes much of our resistance to having them. It is almost always also true that the tough conversation you are pondering right now would have been a little less tough had you started it the first time the thought of it crossed your mind.

What all tough conversations have in common

The excellent book Difficult Conversations outlines three common tough conversations, and it’s worth noting the similarities in them to help a leader navigate what’s happening. Tough conversations have some element of all three in them, even if you don’t address a part out loud.

Before you start a tough conversation (or before you start responding to one), take a breath, step back, and ask yourself what you would like as a resolution. Is your intended result a winner-take-all result, where the only logical possibility is that the other person recant his or her position, completely and permanently change their behavior, plus pay a reasonable tax-free annuity to you as restitution for having such an outlandish opinion in the first place?

That may be how we feel sometimes, but it’s not what will happen, and taking that approach will prevent a solution.

If so, maybe the first tough conversation you need to have is with yourself. Here is a mental checklist to guide you:

That’s the goal for tough conversations: productive, helpful to both of you, and it should pave the way for a better future.

Receive ideas like this every week: new articles on leadership and running a business you started.